A control can have multiple value objects that are related to a control's internal state.

Values differ from properties in that they can be used as triggers for messages and script callback functions.

A value object can be changed by pointers, messages and scripts. Whenever any value object changes, the application will invoke the control's onValueChanged script callback function, if it is defined, and then process all messages that specify the changed value in their list of triggers.

All controls have a Touch value object, the BOOLEAN value of which indicates if there are any pointers currently interacting with the control. 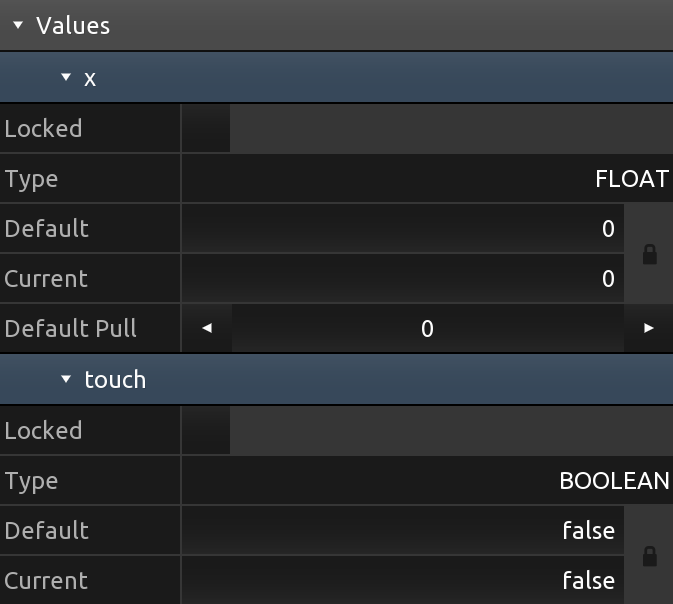 The locked state of the value object.

If a value is locked it cannot be changed by any pointers, messages or scripts.

The type of the value object.

The default value of this value object.

The value that this value object will hold when the document is loaded initially.

The current value of this value object.

A factor, ranging from 0 to 100 that specifies how strongly the Current value will be pulled towards the Default value when the control is not currently the target of any pointer.

Note: This value property is currently only available for value objects of type FLOAT.

The lock icon next to the Default and Current value fields can be used to lock both to the same value, meaning if one changes, the other will also change.

Enabling this property will make sure that the value object will be saved with its current value as the default value, which will then be restored when the document is loaded.